Yes, it’s a salad staple. But did you know that there are many health benefits of lettuce? They might help in lowering cholesterol levels, moderating sleep, controlling anxiety, reducing inflammation, and may provide a constant supply of antioxidants.

Lettuce, scientifically known as Lactuca sativa, was first cultivated by the Egyptians thousands of years ago. The Egyptians used the seeds to produce oil and also utilized the leaves of this useful vegetable. The plant also had cultural and religious significance in ancient Egypt, as it was considered to be sacred. Later, the Greeks and Romans also cultivated this crop. [1]

It was in the period between the 16th and 18th centuries that different types of lettuce were developed. This was due to the discovery that a particular sub-species could cross-pollinate with other sub-species. During medieval times in Europe, lettuce was considered to possess medicinal qualities, which were mentioned in several medieval texts. One can find instances of the plant being prescribed as a medicine for several diseases in the Unani medicine system as well.

The dried latex of lettuce was prescribed for inducing sleep and was used as nasal drops, a sedative, an antispasmodic, and an anodyne. During medieval times and into the beginning of modern times, lettuce spread from Europe to North America. During the 19th century, it spread to other parts of the world as well, particularly to Asia, South America, Africa, and Australia. Today, lettuce can be found in almost all parts of the world, from the Americas to Siberia. [3] [4]

As per the USDA, lettuce contains a high water content, as well as small amounts of energy, protein, fat, carbohydrates, dietary fiber, and sugars. The minerals and vitamins found in it may include calcium, iron, magnesium, phosphorus, potassium, sodium, and zinc along with B-vitamins like thiamin, riboflavin, niacin, folate, vitamin B6, and vitamins C, A, E, and K. [6]

Carbs and Calories in Lettuce

As per Food Data Central, 100 grams of green leaf lettuce contains about 2.9 g of carbohydrates and 15 calories. [7]

For thousands of years, this leaf has been cultivated as more than a vegetable. It can possess several amazing health benefits, including the following.

Lettuce may possess anti-inflammatory properties that help in controlling inflammation. In experimental models, lettuce extracts may have shown significant controlling power over inflammation induced by biocatalysts like lipoxygenase and carrageenan. More research is needed in this arena to bolster these results. [8] 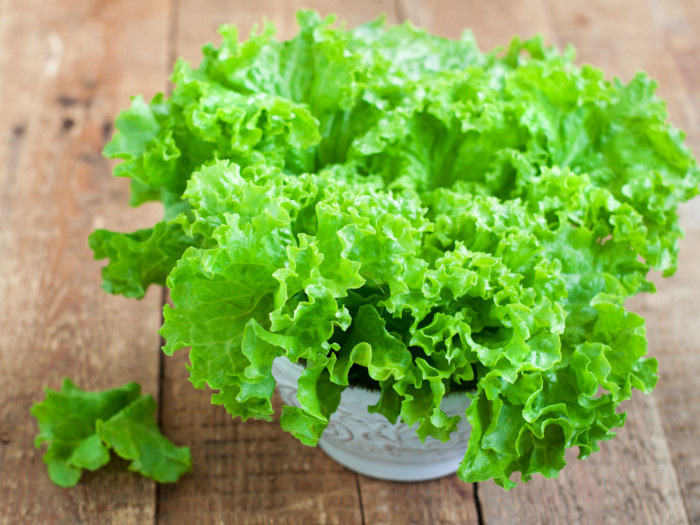 Lettuce might be beneficial in lowering high cholesterol levels that often lead to cardiovascular diseases (CVD) and other dangerous conditions. High LDL cholesterol levels are harmful and can cause heart attack and stroke. A study was conducted on rodents to test the impact of lettuce consumption on fat and cholesterol. The results indicated a significant reduction of cholesterol levels as compared to mice that weren’t fed lettuce. Lipid peroxidation was observed in most cases, which was concluded to be responsible for this form of cholesterol control. These results suggest that lettuce might be contributory as a method to reduce the risk factors of CVD. [9] [10]

One of the major traditional uses of lettuce in Unani medicine was as a sleep inducer. Research into the extracts of lettuce resulted in the isolation of a depressant chemical. This chemical, when administered in experimental animals, showed possible significant sedative effects. A 2013 research report, suggests that the main component(s) responsible for this effect in lettuce is most likely to be the non-polar agent(s), which are found in the n-butanol fraction (NBF)of this plant. Decreased heart rate and ventricular contractions were also observed. This particular chemical acts by blocking the excitatory signal processes of muscular and neural tissues. The effects of lettuce on sleep can be compared to those of diazepam. [11] [12]

Published in the journal Ancient Science of Life Journal, one study stated that lettuce may possess antioxidants with significant free radical-scavenging capabilities. Antioxidants are a wide range of biochemicals mostly found in our diet. They are also very necessary for human health and disease prevention. [13] 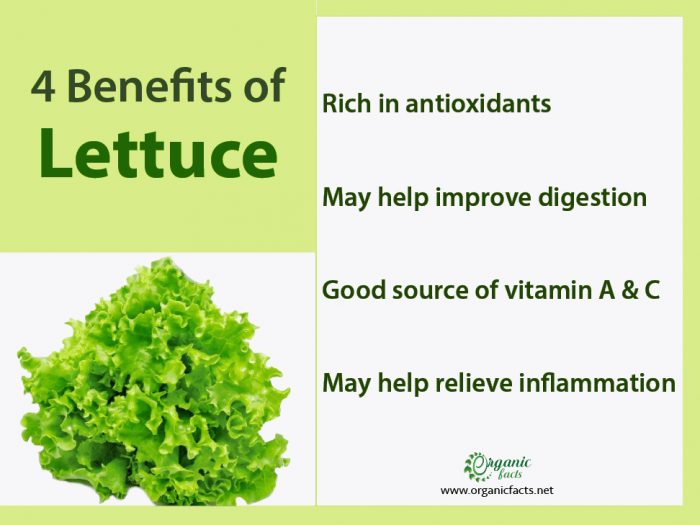 Lettuce is a healthy salad staple.

The latex of lettuce may possess antimicrobial properties. When coming into contact with latex from lettuce, research has shown that Candida albicans and many other yeasts were completely deformed. Biochemicals that are considered to possess these antimicrobial properties are terpenes and cardenolides, as well as enzymes like glucanases. Studies such as these have positive implications for the possible antimicrobial abilities of this vegetable. [16] [17]

The neurological properties of lettuce, as mentioned earlier, have long been suggested during ancient times and the Middle Ages in medical treaties, such as the Unani system. A 2012 research paper published in the Asian Pacific Journal of Tropical Disease has led to the conclusion that lettuce may possess anxiolytic (anti-anxiety) properties. When lab animals were given lettuce extracts, their locomotive activity was reduced, suggesting implications in human populations. As per NIH, leafy greens such as lettuce are also positively associated with our cognitive health. [18] [19] [20]

A few recipes are given below that can be easily tried at home.

Word of Caution: A study report published in the Journal of Investigational Allergology and Clinical Immunology, has shown that even lettuce can produce allergies, and the allergen proteins have been identified. Food allergies are the abnormal response of the immune system to certain types of food that the body recognizes as harmful. Food allergies that result in anaphylaxis are the worst kind and according to the Center for Disease Control, they are on the rise. People who already suffer from food allergies are generally at risk when trying new foods. So, a word of caution is advised while eating lettuce for the first time. [21] [22]

Rate this article
Average rating 3.8 out of 5.0 based on 696 user(s).
Read This Next:
Popular Articles